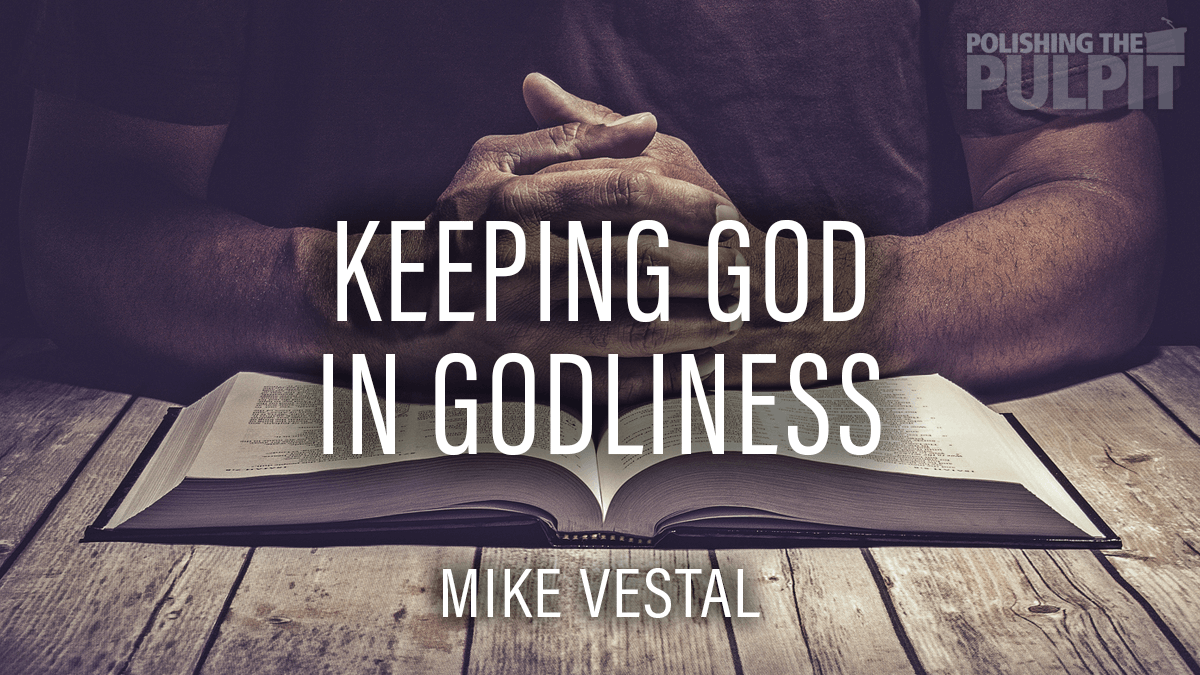 It is significant that 1 & 2 Timothy and Titus give special stress to godliness. As a matter of fact, the vast majority of the New Testament occurrences of the word is to be found in these books. The noun “godliness” is found ten times while the adverb “godly” occurs twice. “Godliness” has reference to a manner of life that reflects awesome respect and devotion to God. The fundamental message of 1 & 2 Timothy and Titus is that God’s people are to reflect a manner of life that shows awesome respect and devotion to God! How we need to keep God in godliness! Let’s trace this theme throughout these three books.

The message behind godliness must be the gospel of God. “Great indeed, we confess, is the mystery of godliness: He was manifested in the flesh, vindicated by the Spirit, seen by angels, proclaimed among the nations, believed on in the world, taken up in glory (1 Timothy 3:16). The point is simple – No gospel = no godliness.

The exercise of godliness requires diligent pursuit of God, rigorous training and growing discipline. Paul’s exhorts, “train yourself for godliness” (1 Timothy 4:7). He adds, “But as for you, O man of God, flee these things. Pursue righteousness, godliness, faith, love, steadfastness, gentleness” (1 Timothy 6:11). How’s your training going?

The value of godliness is far greater than that of any physical pursuit. This is because we are pursuing a relationship with the God of heaven! Paul says that “while bodily training is of some value, godliness is of value in every way, as it holds promise for the present life and also for the life to come” (1 Timothy 4:8). Our words and actions will reflect what we truly treasure! (Matthew 6:19-21; Colossians 3:1-4).

The method for becoming more godly is to learn from and to properly apply the word of God. “If anyone teaches a different doctrine and does not agree with the sound words of our Lord Jesus Christ and the teaching that accords with godliness, he is puffed up with conceit and understands nothing. He has an unhealthy craving for controversy and for quarrels about words, which produce envy, dissension, slander, evil suspicions, and constant friction among people who are depraved in mind and deprived of the truth” (1 Timothy 6:3-5). Titus 1:1 speaks of the necessity of knowing the truth, “which accords with godliness.” Low views of Scripture do not produce true godliness!

The motivation for godliness is the grace of God in providing Jesus. “For the grace of God has appeared, bringing salvation for all people, training us to renounce ungodliness and worldly passions, and to live self-controlled, upright, and godly lives in the present age” (Titus 2:11-12). Grace trains and instructs us how to live. To lack desire for greater godliness is to lack appreciation for grace. Grace is a school Christians have entered and in which we should be constantly developing and growing.

The abuse of godliness is serious. Some imagine “that godliness is a means of gain” (1 Timothy 6:5). Godliness can become a means of feeding our pride, of building our bank account, of becoming “somebody” of prominence and clout. But this prostitutes what godliness is really all about! Further, some have “the appearance of godliness,” but “deny its power. Avoid such people” (2 Timothy 3:5). It IS possible to take God out of godliness. When one does, there is a shell of a person lacking real life!

Godliness is NOT a condition into which we drift. It requires desire and effort. Neither can true godliness be found merely in our own means and strength – by leaving God out of the equation. Godliness is God’s people reflecting a manner of life that shows awesome respect and devotion to God. To understand this principle more is to better understand what it really means to honor and to glorify God.

Category: Mondays with MikeBy Polishing the PulpitMay 21, 2019Leave a comment