Needed: People Who Are Full of God 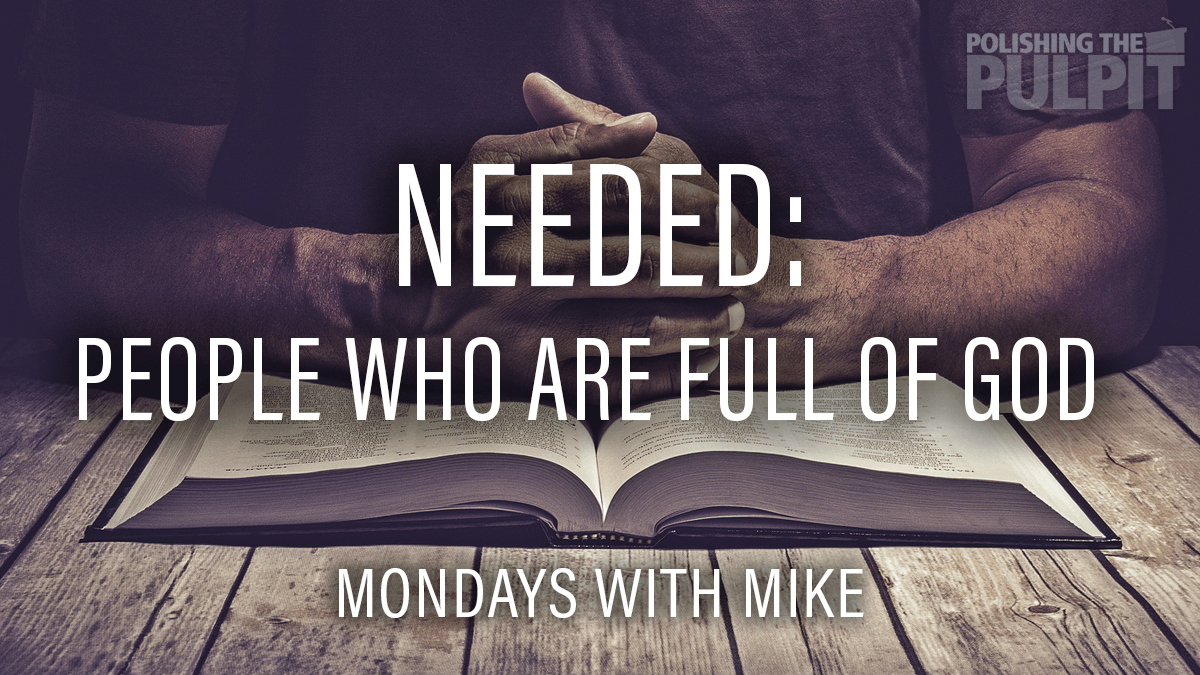 His story only covers about two chapters in the New Testament, but what an impact he made! He did more in a relatively brief time of living and dying for Jesus than many Christians would do if they lived to be as old as Methuselah! I’m speaking about Stephen. One word best describes his life, and it’s a word we would do well to contemplate and to emulate; that word is “FULL.”

“Full” is the word Scripture repeatedly uses with reference to this man of God (cf. Acts 6:3, 5, 8; 7:55). Stephen was full – he overflowed with the character of his God. Some are full of confusion or disgrace (Job 10:15). Others may be full of extortion (Matthew 23:25) or deceit and villainy (Acts 13:10). But Stephen was full of Jesus. And it showed. The world can’t ignore or treat with indifference those who are genuinely full of their Lord. A lot of so-called Christianity is so weak and empty it is not even worth fighting by Satan and the world. Would “full” of God be an accurate way to describe us? Notice how Stephen was “full” of the character of God.

(1). Stephen’s Faith Was INCLUSIVE – He Was Full of the Holy Spirit (Acts 6:3). By this it is meant that God had ALL of Stephen. The Lord had Stephen’s heart, will and mind. God had Stephen’s appetite and practice (cf. 1 Corinthians 6:19-20; Galatians 5:22-26). And while it is true that this context involves the miraculous, and that miraculous gifts have ceased (1 Corinthians 13:8-13; Hebrews 2:1-4), one ought not to lose sight of the fact that we still should be full of God and the Holy Spirit’s fruit.

(3).  Stephen’s Faith Was RESPONSIVE – He Was Full of Faith (Acts 6:5). His was a faith that worked through love (Galatians 5:6). Stephen did not merely have faith in faith; his faith had both an object (God) and content (truth). True faith is only as good as its object and content (see Hebrews 10:22). How responsive is your faith?

(4). Stephen’s Faith Was ATTRACTIVE – He Was Full of Grace (Acts 6:8). A shortage of grace tends to repel people, but speaking and acting graciously tends to be attractive (Ephesians 4:29; Titus 2:11-15). There is a time to speak with boldness and conviction regarding sin, as Stephen well illustrates (Acts 7). However, it also is certainly appropriate to ask, “Can others see something of the grace of God in and through us?” We are never more like our Lord than when we are full of grace! (John 1:14-18).

(5). Stephen’s Faith Was EFFECTIVE – He Was Full of Power (Acts 6:8). The power of Stephen’s words and actions is unmistakable, and that is because Christ was his life (Colossians 3:4) and the gospel was his power (Romans 1:16). Whether in service to others or responding to difficulty and to persecution, there was power in Stephen’s life. And that power was not his own but Christ’s (cf. Philippians 3:10). Think of the impact the words and life of Stephen must have come to have on young Saul of Tarsus!

Stephen did not live to see the full impact of a life lived fully for God. And neither do we. But if we, like Stephen, take care of the depth and fullness of our spiritual life, we can count on the Lord to take care of our life and ministry’s length, breadth and height (Ephesians 3:18-19). And like Stephen, whose name means, “victor’s crown,”we too can be crowned with victory in Jesus!

Category: Mondays with MikeBy Polishing the PulpitApril 10, 2018Leave a comment