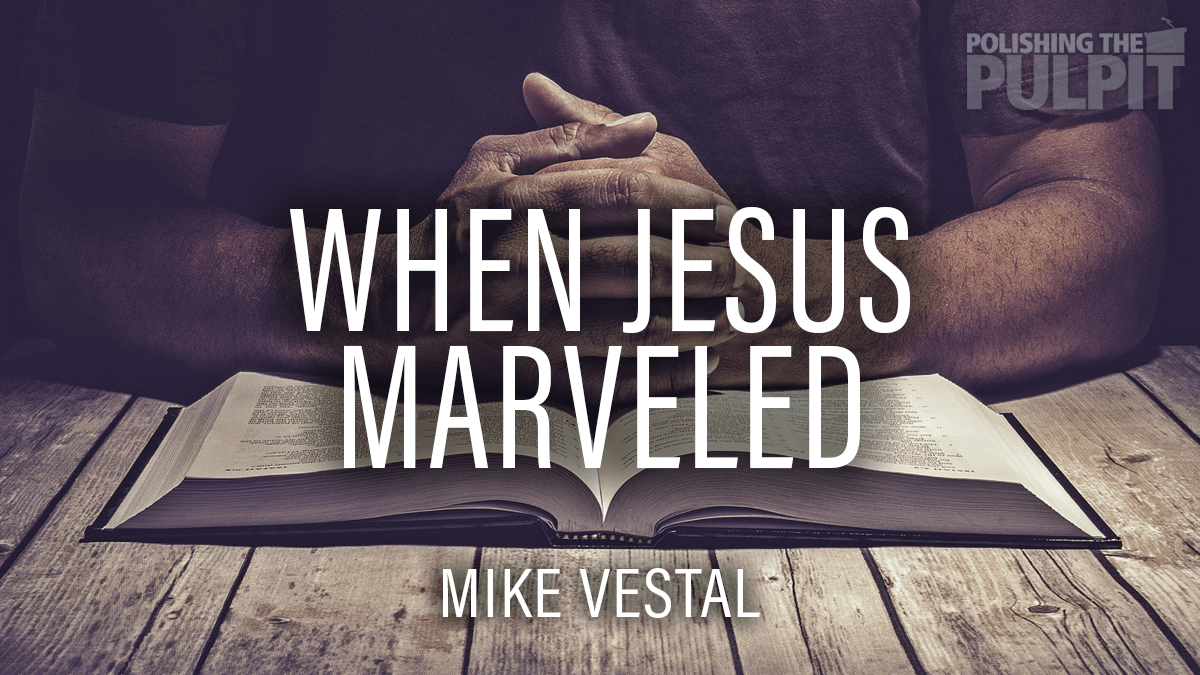 That the Son of God marveled is in itself a marvel! The Lord’s work in creation, salvation, and providence ought to cause all humanity to marvel and be awe-struck! (Psalm 8; 19:1; Acts 14:17; Revelation 5:8-14). In a world that’s too easily “amazed” in some ways and not enough in others, there’s a place for restoring the biblical doctrine of amazement. The people of God must not suffer from blindness and “awe amnesia” when it comes to contemplating the wonders of God’s character and works (cf. 2 Peter 1:3-11).

Twice in the New Testament it is said that Jesus “marveled.” The same Greek word is used for both occasions, a term that means “to wonder and be amazed.” What caused the Lord to marvel?

The Lord Marveled at the Absence of Faith Where It Should Have Been Found. In Mark 6:1-6 Jesus came to His hometown of Nazareth and began to teach on the Sabbath in the synagogue. Many of those who heard Him were astounded and overwhelmed! (Mark 6:2). They ask questions like “Where did this man get these things?” “What is the wisdom given to Him?” “How are such mighty works done by His hands?” “Is not this the carpenter, the son of Mary?” They ask about His brothers and sisters too. It’s obvious they certainly have heard about a number of His amazing miracles and that they marvel at the depth and richness of His teaching. They are aware of Mary who can certainly confirm His identity as the promised Messiah. Yet according to the text, the are “angry, take offense and stumble” due to Him. They viewed the Lord as scandalous and offensive! Mark 6:6 says that Jesus “marveled because of their unbelief.” Despite their great opportunity and the overwhelming evidence, they not only disbelieved but refused to trust in Him.

The Lord Marveled at the Presence of Great Faith Where It Was Less Likely to be Found. In Matthew 8:5-13 we read of a centurion who comes to Jesus on behalf of sick servant who was “at the point of death and highly valued by him” (see Luke 7:2). This centurion was a Gentile and a soldier; Jesus was a Jew and the “prince of peace” (cf. Isaiah 9:6). One might think the two would have been polar opposites. However, three words link the centurion to Jesus. The first word is humility. It’s seen in the words “I am not worthy to have you come under my roof” (Matthew 8:8; Luke 7:6). What humility for Jesus comes from this Roman soldier! The second word is authority. The centurion says, “I too am a man under authority, with soldiers under me. And I say to one, ‘Go,’ and he goes, and to another, ‘Come,’ and he comes, and to my servant, ‘Do this,’ and he does it” (Matthew 8:9-10).  The centurion acknowledges the power and authority of Jesus, which is far more than did most of the Jewish religious leaders! He even acknowledges that Jesus has authority over life-threatening disease. That’s the whole point of the statement. The third word is fidelity. This is seen in Matthew 8:8, “only say the word, and my servant will be healed.” The centurion believes Jesus can heal his suffering and near-death servant from a distance with only a word. That’s trust!

The Lord “marveled” upon hearing these words (Matthew 8:10). Hear the words of Jesus concerning this centurion’s faith: “Truly, I tell you, with no one in Israel have I found such great faith” (see KJV, NKJV, NASB). And the centurion’s servant was healed.

You can tell much about a person by what amazes or fails to amaze them today.

Category: Mondays with MikeBy Polishing the PulpitNovember 16, 2020Leave a comment