Great Preachers of the Past: Johnny Ramsey 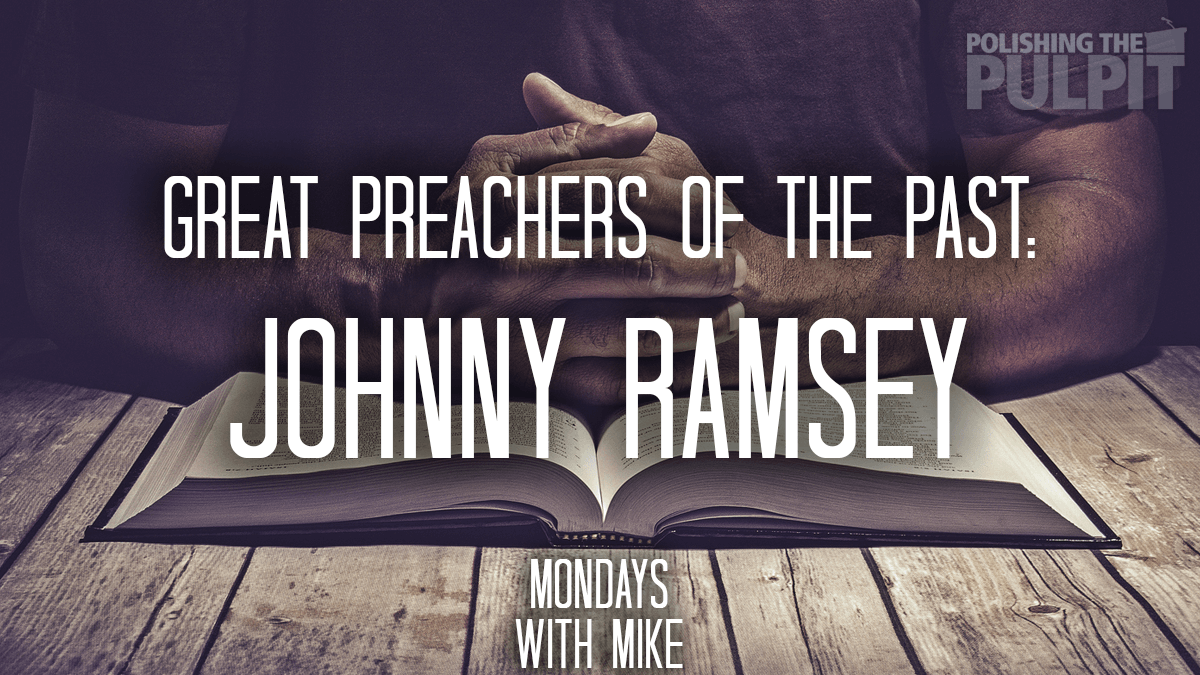 The first time I met him he said, “Why don’t you sit down and tell that man (my future father-in-law, who also was sitting in the room) exactly what your intentions are concerning his daughter?” Then he left the room! Johnny Ramsey was one part Jeremiah, one part John the Baptizer and one part machine gun! And for the next thirty plus years, Johnny would be a spiritual father to me, a wise and trusted counselor and a very generous and faithful friend. To all who knew him, he was simply Johnny. He never wanted to be called anything else. And this Johnny was both a “son of thunder” and a messenger of love.

Johnny Ramsey truly was a “walking Bible.” Whenever Johnny preached, you heard the B-I-B-L-E and lots of it! The word of God filled his heart and his eyelids! (He often shut his eyes when quoting Scripture). Children in congregations everywhere tried to keep up with the number of verses he quoted, only to be astounded that they frequently could not. Indeed, it was not unusual for him to quote 200 or more passages in one sermon.

Johnny Ramsey was born in Sherman, TX on July 5, 1930. He graduated from Abilene Christian, where he met and eventually married his sweetheart and best friend, Iris. Her kind, gracious ways were a tremendous help in Johnny becoming the great man of God he became. Johnny served as the local preacher for a number of congregations, especially in Texas, and mission work was done for a number of years in Australia, but it would be through his writing, gospel meeting work and speaking in lectureships that Johnny would especially leave his mark. From 1975-2000, he likely held as many or more gospel meetings as any man among us. He also left an indelible impact on hundreds of men he taught over the years in at least three different schools of preaching.

Johnny was a master of the pulpit, thought well on his feet and had a simply uncanny way of taking seemingly complex matters and reducing them to simple but profound biblical truths. He had a phenomenal ability to recall people, events, and Scripture. He also seemed to have a gift of discernment – he knew people and human nature! Many years ago during a phone conversation, I told Johnny of a man in the church where I preached who threatened to beat me up. Johnny was about to hold a gospel meeting for us and told me that he would tell me who the man was before the Sunday of the meeting was over (I had NOT divulged the brother’s name or anything about his appearance). Sure enough, by the time the Sunday AM service was over Johnny told me exactly who the man was (and 140 people were present). I was amazed!

Johnny Ramsey was a biblical scholar, but not in the sense some typically mean. He had mastered the English Bible. Johnny simply had a remarkable grasp of all things Bible related; his file cabinet brain had topically and thematically categorized things so he could weave together an incredible tapestry of a sermon. And like an unbelievable athlete or musical virtuoso, he made it look easy. He could violate some so-called rules of Homiletics and still preach a masterpiece. To listen to Johnny Ramsey preach was to be so saturated with Scripture you were “baptized” and to hear Jesus so exalted you were made to bow in worship.

I was in my twenties more than a few years ago when I heard Johnny survey the book of Revelation and Wendell Winkler preach on the Judgment at a lectureship in Denton, TX. To this day, it remains the most memorable night of preaching I’ve ever heard. It was “Home Run Derby” in Denton that night! And I knew how Peter must have felt at the Mount of Transfiguration when he wanted to construct altars – one for Jesus, Moses, and Elijah. I initially wanted to construct one, so to speak, for the Lord, for brother Winkler and for Johnny that night! But that is not at all what Johnny or brother Winkler would have wanted – they would want all the emphasis to be on Jesus! And what a valuable lesson: no matter how great the abilities of the preacher, the emphasis must ever be on the Lord whose message preachers are privileged to proclaim!

If a man truly loved God and His word, he would have a real and a generous friend in Johnny Ramsey. Johnny did not suffer men of divided allegiances! But many of us over the years were given money, books, ties and other thoughtful gifts as an investment in our lives and ministries by Johnny and Iris. When our son David was born almost 30 years ago, we had no maternity insurance. My wife had serious complications in giving birth. The first offer of help was from Johnny Ramsey. He called to indicate that whatever the medical expenses were, he and Iris would be there to help. And help they did – and more.

Johnny Ramsey was biblical, bold and blunt. But there was a beauty about his life that made him truly extraordinary. He showed me Jesus, and he taught me much. He made an impact on every soul that ever heard him preach. As a master of the pulpit, he always exalted the Master and King. Tens of thousands were made to love God and to serve Him better due to Johnny’s selfless efforts in his 57 years of preaching Christ. Johnny went to be with our Lord in 2006. I still miss the phone conversations, the meals we would share and going to high school football games with him. Just before he died, Iris told me how Johnny was quoting one Scripture after another. What had sustained him throughout his life and ministry – Jesus and His precious word – saw Johnny through life’s closing moments and into eternity. How fitting! May the same be true of all who proclaim the message of Jesus Christ! All Johnny ever wanted to be known as was for being a gospel preacher, yet what a gospel preacher he was.—Mike Vestal

Category: Mondays with MikeBy Polishing the PulpitJune 6, 2017Leave a comment